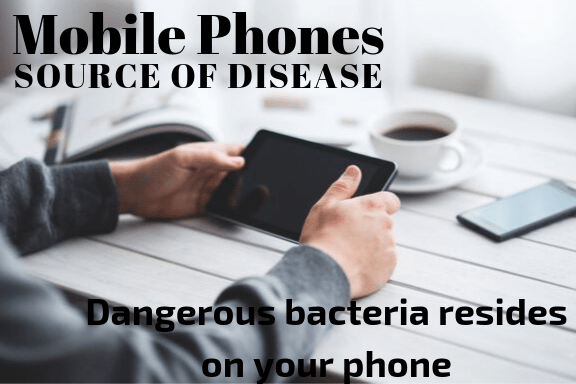 Many people may be unaware but this is the bitter truth. mobile phones are considered dirtier than the toilet seats.

mobile phones are safe haven for bacteria, None of us ever think of cleaning or disinfecting the phones. never in our life time we clean our phones, we use it while eating. sleeping, in the Gym and in the toilets as well.

we share our phones with friends and families, we keep it on tables in cafeteria and many unknown places. unaware that bacteria are breeding in millions on the surface of these phones

As per research over the world medical association many of the dangerous bacteria were found on 90% of the people across the globe.

Research was done at different locations with different sects of people but results were almost same. From Africa to America, India to Australia the mobile usage behaviors of people is almost same.

In fact the most dangerous bacteria were found among the doctors as they carry their phones in hospital and in the patient wards and even in operation theaters, they keep the phones at many places where the bacteria were maximum

The increase in allergy among kids is on rise now a days and parents were not sure of the cause, but after research its found that mobile phones were the culprit. kids normally use tabs which has a larger screen and thus gives more space for bacteria to reside.

also kids are found to touch their mobiles and tabs while eating and food particles get deposited on mobiles. we never clean our phones and hence rise in bacteria.

Recent studies suggest that these phones are reservoirs for pathogens with potential to cause nosocomial infections.

Mobile phones of healthcare workers have a high rate of colonization with bacteria potentially causing nosocomial infections. Disinfection with 75% alcohol was effective in reducing bacterial colonization.

Helpful tips to prevent getting sick from your phone

Keeps your hands away from your mouth , eyes and nose specially while using mobile phones. wash your hands with soap after prolong use of mobiles, tabs or computers

Do not carry your phones to bathroom and kitchen. as these places are very vulnerable and there are high chances of bacteria to land on your phones.

Wipe your phone with Dettol or alcohol based liquid periodically, It is important to disinfect your phone every so often. Germs from your hands can be transferred to your face via your phone.

Do not place your phone on germy surfaces like bus seat, Flight seats, counters, and public places, as Germs from these locations can get on your phone. Remember, your phone touches your face and ears and bacteria can easily be transferred to your delicate skin of mouth and ears.

Coughing or sneezing can spread these germs through microscopic droplets in the air. Cover your mouth with your arm, sleeve, or crook of the elbow, rather than your hands.

Restaurant tables are full of bacteria and we normally keep our phones on tables while we eat in restaurant. avoid using phones while eating and keep in in bags while in public places.

share this article with your friends and family and spread the awareness of mobile usage among each other help them with the tips to avoid infections through the use of mobile phones.

October 22, 2016 Zimka Comments Off on Three-year-old boy struggles to walk after rare condition makes his leg QUADRUPLE in size

October 2, 2016 Zimka Comments Off on Why only women with the 'Angelina Jolie gene' should have their ovaries removed

December 4, 2016 Zimka Comments Off on Saturated fat is good for you according to University of Bergen study